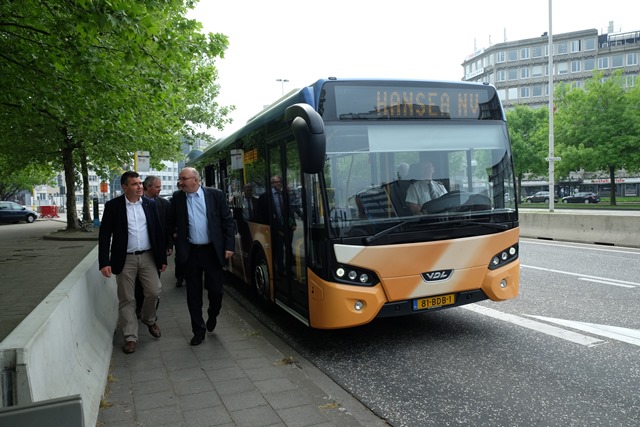 At the recent Busworld, VDL Bus & Coach introduced its Citea Electric, a fully electric bus powered by two rear-wheel hub motors. As the weight of the battery limits the number of passengers, a small battery with an action radius up to 80 km was chosen. By fitting a battery with a higher capacity, this radius can be increased to 200 km but this does affect the number of passengers. At the end of April, Hansea was the first transport company in Belgium to pioneer the use of an electric city bus. In consultation with VDL Bus & Coach, the Citea Electric drove the route of the Antwerp bus number 36, normally serviced by Bus De Polder. The route starts at the bus station on the Franklin Rooseveltplaats and traverses through the busy city traffic to the Waaslandtunnel and then underneath the Schelde, over to the Linkeroever. Environmentally friendly solution for urban transport  "The test drive went without a hitch. We really put the bus to the test by pulling in at every bus stop and leaving each time from a complete standstill. The steep accessroads to the Waaslandtunnel, where a diesel bus has to really put down the throttle, were navigated without a problem", says Mario Provez. “Depot managers, mechanics and invited guests for the test project were very satisfied. The vehicle drives a lot more smoothly than a diesel bus, it also accelerates swiftly and seamlessly. Whilst a diesel hybrid bus still has limited emissions, an electric bus reduced these to zero. I am convinced that electric buses will be the solution to urban transport within a few years and that they could also be used by operators. The electricity use is minimal and makes up 1% of the battery capacity per kilometer driven. When lights and air conditioning are used, this increases to 2%." "An electric bus is currently still twice as expensive as a standard bus. The maintenance costs will probably go down, as there are less moving components and less oil and filters to change. The cost of electric might increase, but we will have to monitor that", states Mario Provez. "It is possible for electric buses to be perfectly integrated in city transport if a charging point could be provided at the last stop, or if the vehicles were able to collect electricity from the tram wires through a pantograph, or if we would be able to charge the batteries during off-peak hours. To compensate the additional costs in the first few years, we could initiate a cooperation project between - for instance - the city council, the energy supplier, the transport company and the operator." The trial project has proven that Hansea, in cooperation with De Lijn, is ready to start using electric buses on city routes. As long as the specifications and the provision of several additional facilities are amended, extremely environmentally friendly and electric city transport can be made a reality within a few years."